Four historic Patriarchal centers – Jerusalem, Antioch, Alexandria, and Rome – were established in the first century, and Constantinople in the fourth; yet all these five centers formed a cohesive whole of the Christian Church and were in full communion with each other.

There were heretical or schismatic groups going their own way, but the Church, through ecumenical councils, could keep her unity and settle the orthodox faith. The first Council was held in 325 A.D. at Nicea when representative bishops of all Christians, traditionally numbering 318, assembled to discuss the heresy of Arius who taught against the divinity of the Lord Jesus Christ. The Nicene Council condemned Arianism and gave Christianity a creed which has survived to this day. Behind the Nicene triumph stood St. Athanasius the Great, the twentieth Coptic Pope of Alexandria, Egypt (died 373 A.D.), who, still a young deacon, came to the Council with his old patriarch, Alexander. The final victory of orthodoxy was achieved at the second ecumenical Council of Constantinople in 381 A.D., when 150 bishops condemned another heresy. Macedonius claimed that the Holy Spirit is not the eternal Spirit of God but a created one. The council completed the Nicene Creed asserting that the Holy Spirit is the Lifegiving Lord Who proceeds from the Father. The following century saw St. Cyril the Great of Alexandria (died 444), who presided in 431 the Council of Ephesus where 200 bishops condemned Nestorius, the formidable Patriarch of Constantinople, who rejected the term Theotokos, the Mother of God, in regard to the Holy Virgin St. Mary.

This idea led to the inference of the dual nature of the Lord Jesus; His divinity and His humanity. This dualism was decreed in the Council of Chalcedon in 451 A.D., in spite of the objection of the Coptic Pope Dioscorus. Thence, the Church was divided into two groups: Rome and Constantinople, who accepted the doctrine of two united natures, on one side, and Alexandria and Antioch who held the belief of one nature out of two natures of the Incarnate Lord. In 589 A.D., in the synod of Toledo, Spain, the filioque, a doctrine claims that the Holy Spirit proceeds from the Father and the Son, was added to the Nicaeo-Constantinopolitan Creed. This error was later adopted by Rome. The addition of the filioque clause, and the issue of Rome’s claim to a universal (Catholic) papal supremacy, caused a schism between Rome (surnamed the Roman Catholic Church) and Constantinople (surnamed the Greek Orthodox Church). Another schism took place in 1517 A.D. when Martin Luther nailed his 95 Theses to the door of the Roman Church of Wittenberg, Germany, starting the Protestant Reformation. Then Protestantism was divided into hundreds of Churches holding different doctrines.

Finally, in the 1990s, the two Orthodox families, the Chalcedonian Churches, including the Greek, Russian, Ukrainian, Serbian, etc., and the Non-Chalcedonian Churches, including the Coptic, Syrian, Armenian, Ethiopian, etc., came to an agreement of one faith that the Lord is perfect in His divinity as well as in His humanity, and the unity between both natures is real.

By the great effort of His Holiness Pope Shenouda III, the recent Coptic Pope, and his fellow Orthodox Patriarchs, this agreement was achieved and the unity of Orthodoxy was accomplished, but it has yet to be formally recognized by the Holy Synods of both families of churches. 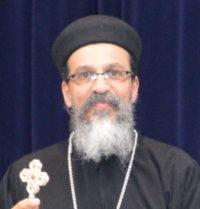